by Ian Yule
The 7th Asian-Australian Conference for Precision Agriculture was held in Hamilton New Zealand between the 16th and 19th of October 2017. This event was a Tri-Conference (PA17) which included the 7th Asian-Australasian Conference on Precision Agriculture, the 1st Asian-Australian Conference on Precision Pasture and Livestock Farming and the Digital-Farmer 2017. Over 500 delegates attended the overall event. The organisation of the conference was organised under the auspices of the Precision Agriculture Association New Zealand, (PAANZ). Conference chairman was Armin Werner, chair of the conference organising committee was Jim Grennell, delegates were welcomed by the chairman of PAANZ, Craige Mackenzie. Many others assisted within the organising and scientific committees. The event was managed by ForumPoint2 conference partners. The event was also generously sponsored by a number of New Zealand and international companies and organisations, as well as being supported by New Zealand’s Ministry for Primary Industries (MPI). 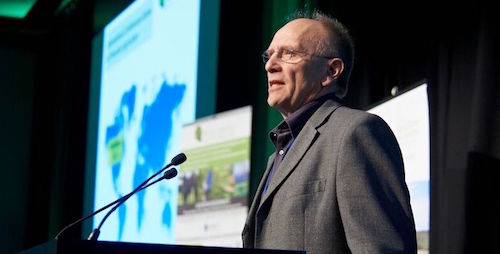 The event was deemed to be a huge success, it brought the Asian and parts of the world network of precision agriculturalists together to observe the diversity of New Zealand agriculture and horticulture, as well as exposing domestic delegates to ideas and research from overseas. The programme was perhaps more diverse than other PA conferences around the world and this reflected the increasing interest in livestock farming and horticultural crops. The philosophy of precision agriculture seems well accepted and being applied to an increasing number of food production systems. Agriculture, Horticulture, Forestry, Housed livestock, intensively grazed livestock and extensive grazing systems.

Next ACPA Conference.
Preliminary notice was given that the next ACPA, ACPA 2019 will be held at the Punjab Agricultural University between October 15 and 17th 2019. The contact person for the conference is Dr Manjeet Singh, manjeetsingh_03@pau.edu. He addressed PA17 and invited delegates to attend the 2019 event.
ACPA, ISPAG Monthly Newsletter
Back